This news story was published on December 17, 2011.
Advertise on NIT • Subscribe to NIT 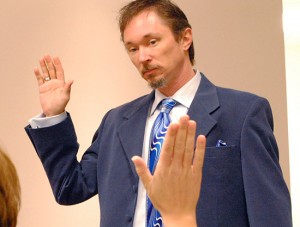 MASON CITY – Mason City Pastor Shane Philpott has written extensively about his ordeal with the Mason City Police Department at a website called FindJodi.com. The website is dedicated to finding the truth behind the disappearance of Jodi Huisentruit.

In a series of posts, Philpott writes about the MCPD, elected and un-elected Mason City officials, the Iowa DCI, the Globe Gazette, NorthIowaToday.com, the FBI, and a former MCPD police Chief.

Philpott is a pastor at Christian Fellowship Church in Mason City.

Philpott, when contacted by NorthIowaToday.com, had nothing further to add at this time.

Some quotes from the blog posts:

– “I supplied our City leaders with sensitive information in regard to the Huisentruit case, and they leaked it to the media? This is exactly how the “establishment” works, and their actions are reprehensible.”

– “At the deposition of former Chief Ellingson on August 3, 2010 in Des Moines, Iowa, he admits that he had possession of a copy of Jodi Huisentruit’s diary, and that his wife sent it anonymously to the local newspaper, the Globe Gazette, in June 2008. No charges were filed against Cheryl Ellingson. Mr. Ellingson stated in his deposition that what his wife sent to the newspaper was a photocopy of Jodi’s diary, and that she was not bound by the police department policies.”

– “I have attempted to take this information to all members of the City Council, and none will respond to me. I asked my councilperson, Jeff Marsters, to have this topic placed on the City Council Meeting Agenda this past summer, and it never was. At the suggestion of the Iowa Department of Justice and the Ombudsman’s Department, I have brought this information to the attention of Mayor Bookmeyer as well as City Adminisrator Brent Trout, and neither of them will respond to my complaints. I have also supplied this information to the Globe Gazette and KIMT, and neither of them will report on the matter.”

– “I have taken information to the Globe Gazette newspaper here, and I received an email from John Skipper who spoke with the general editor Jane Reynolds, and he stated in his email they didn’t want to get in the middle of it.”

– “We had no option but to file the defamation suit against the City as there were some officers within the MCPD that had targeted our church and myself which resulted in multiple IRS audits and other forms of harassment.”

Click here to read the entire blog thread at FindJodi.com.