For Palestinians, prison time is a badge of honor 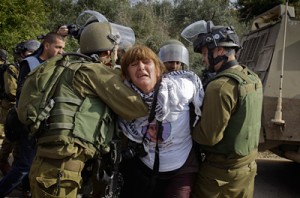 NEBI SALAH, West Bank — Uday Tamimi kept one eye on his family and the other on a line of Israeli military vehicles parked at the bottom of the Nebi Salah village road.

(Palestinian, Israeli and foreign activists are detained by Israeli soldiers after trying to enter the Israeli settlement of Halamish on December 16, 2011.)

The 20-year-old had been released from prison less than a week before, the most recent member of his family to serve time for his part in the weekly Friday protests in this Palestinian village, a cornerstone of the nonviolent Palestinian resistance movement.

As Israel prepares to release 550 Palestinians on Sunday in the second stage of a prisoner exchange deal with the Islamist Hamas movement, many Palestinians already are calling it an empty gesture, because historically prisoners whom the Israelis have freed are likely to be rearrested on similar charges. For Palestinians such as the Tamimi family, therefore, time served in Israeli jails is a badge of honor and a sign that they’ve played their part in the resistance movement.

In this weekend’s prisoner release — which follows 450 Palestinians set free in October in exchange for captured Israeli soldier Gilad Shalit — the majority of the prisoners are expected to be released into the West Bank.

Uday Tamimi grew quiet when he was asked about his siblings. Of the five brothers in the family, four have spent time in Israeli prisons. His sister’s husband and several cousins are currently in jail. During the weekly protest last Friday, his older brother, 28-year-old Mustafa, was killed when Israeli forces fired a tear gas canister at his head from close range, he said.

“We accept this is part of the struggle. We know the dangers and we persist,” Tamimi said.

Each Friday in Nebi Selah, dozens of Palestinians gather to march down the village roads toward the Israeli settlement of Halamish, which cuts off access to a nearby spring.

Locals estimate that about half the men in the village have spent time in Israeli prisons for participating in the protests. Statistics published by Palestinian human rights groups estimate that one-fifth to one-sixth of the Palestinian population has been imprisoned since 1967, but instead of that deterring the protesters, villagers in Nebi Salah said they’d formed a type of stubborn indifference.

“Even if they arrest us, we return and continue fighting. This is the cycle we must follow. This is the game we play with them,” said Ibrahim Musar, a 21-year-old protester who came to Nebi Selah on Friday from Ramallah.
Musar’s older brother and two of his cousins are serving two-year sentences in Israeli jails. On Friday, Musar stood near the front of a group of youths who threw rocks at Israeli soldiers parked nearby.
“For this they arrest us. They take our photos and identify us and this is their evidence. For us, this throwing stones is legitimate resistance,” he said.

Israeli prison services estimate that there are 4,772 Palestinian “security prisoners” serving terms in Israeli jails this month. Of those, 552 are serving life terms for political crimes.

The Tamimis and others say that Sunday’s prisoner release pales in comparison with such figures.

“We will celebrate the release of our brothers,” Uday Tamimi said. “We cannot stop fighting until all our brothers are freed.”

His friends pointed out that new prisoners are arrested weekly. Since the first phase of the prisoner exchange, Israel has arrested 470 Palestinians, according to prison services.

“They are filling the prisons again,” Musar said. “Maybe next time it will be me.”
Uday Tamimi said he wasn’t scared to take part in the weekly protests, even if it meant serving another prison sentence. He regrets not being with his family when his brother was killed; he learned of it from fellow prisoners who watched the news on television.
He was released last Sunday, the day of Mustafa’s funeral.

Photographs show Mustafa Tamimi chasing after an armored military jeep, hurling rocks alongside several others. The door to the jeep opens and a soldier fires a single round directly at Tamimi, who appears to be standing about 10 yards from the door of the jeep. He was taken to a hospital in Israel, where he died from internal hemorrhaging.

Israel said it had begun an investigation into the incident “to see if our actions were correct and what exactly led to his death,” said Barak Raz, a spokesman for the Israeli military in the West Bank.

Israeli officials have charged that their forces broke protocol, which prohibits soldiers from firing tear gas canisters at a range of less than 100 meters — about 110 yards — and at angles that could cause head injuries.

But Musar said, “We are used to the army breaking protocol: It happens every Friday in the village when we challenge them. We are happy to be injured, go to jail, to die even in our popular resistance struggle.”
———
(Frenkel is a McClatchy Newspapers special correspondent.)