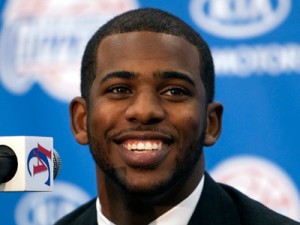 PLAYA VISTA, Calif. — Point guard Chris Paul was asked Thursday if he dreamed about lobbing passes to Clippers’ high-flying dunk artist Blake Griffin as trade talks went back and forth this week.

(PHOTO: Chris Paul speaks to the media as he’s introduced during a news conference at the Los Angeles Clippers’ training facility in Playa Vista, California, on Thursday, December 15, 2011.)

“In order to dream, you actually have to sleep,” he said at his introductory news conference at the Clippers training center. “I haven’t slept in about a week and a half.”

It took nearly two sleepless weeks for the Clippers and New Orleans Hornets to finalize the trade that brought the All-Star to Los Angeles.

But it only took a few minutes before Paul was asked what the other trade — the ill-fated one to the Lakers.

The Lakers had traded for Paul in a three-team deal that was vetoed by the NBA, which said the league-owned New Orleans Hornets were not receiving enough young talent.

“I didn’t know what to think,” Paul said. “But that’s behind me now. Everything now is about what we can do here. That’s my mindset.”

Paul was steadfast in not wanting to discuss the near-trade to the Lakers, refusing even to say the Lakers’ name while sitting at a table with Clippers coach Vinny Del Negro, general manager Neil Olshey and president Andy Roeser.

“The other team has won championships, and it’s about winning, but I think Blake has done an unbelievable job changing that (perception),” Paul said.

“You can’t take anything away from him about how he has changed the culture here in L.A. I’m coming here to join and be a part of it, and hopefully we can grow together as basketball players and continue to change everything. That’s what we play for.”

Away from the cameras, Paul said he has put the Lakers ordeal behind him and is focusing on turning the wayward Clippers into champions.

Paul, who has career averages of 18.7 points and 9.9 assists, said he is eager to get on the floor with his new teammates and start turning Los Angeles into a two-basketball town.

“I am a crazy competitor,” he said. “That’s what made me the player I am. I just have to compete.

Knowing they’ve never won a championship here, I wanted to come and be a part of making that happen.

Griffin said after Thursday’s practice the team has “a lot of work to do now that the target has shifted a little bit but the only thing I’m going to promise you is that you’re going to get our best every night.

“And when you hear the Clippers it’s not going to be a joke anymore. I can guarantee that.”
Olshey said that in one move, the Clippers have gone from perennial butt of jokes to contenders.

“It (the trade) accomplishes everything Vinny and I have been blathering on about for the past two years, which is to change the culture and that’s what we did today,” he said.
___
©2011 The Orange County Register (Santa Ana, Calif.)