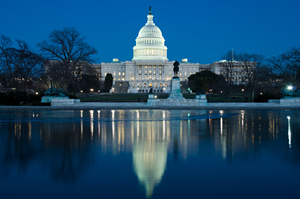 The National Defense Authorization Act of 2012 passed the Senate on an 86-13 vote, a solid show of support that belied the considerable opposition and debate behind it.

Several Democrats said they voted for the bill — which sets Pentagon policy, authorizes $662 billion in spending and gives service members a pay raise — despite their concerns about the detainee provisions. President Barack Obama initially said he would veto the legislation, but he withdrew the threat after the White House said it was satisfied with revisions made in negotiations this week between the House and Senate.

The final compromise mandates that terrorism suspects thought to have ties to al-Qaida and planning attacks against the United States be taken into military custody, even those captured in the U.S. In response to some complaints, though, the bill carves out an exemption for U.S. citizens and legal permanent residents.

The bill also allows the military to indefinitely detain terrorism suspects accused of having ties to al-Qaida, the Taliban or forces engaged in hostilities against the U.S. That provision specifies that such power cannot be applied to U.S. citizens captured in the U.S.

Supporters of the detainee provisions said they were necessary to improve rapid intelligence gathering and interrogation in the moments after a suspect is captured, which might be hindered if the suspect were held by civilian authorities.

“No member of al-Qaida, no terrorist, should ever hear the words, ‘You have the right to remain silent,’ ” said Sen. Kelly Ayotte, R-N.H.

Civil liberties groups and some Democrats raised concerns that the provisions could be used to trample on citizens’ right to due process in U.S. courts.

Sen. Dianne Feinstein, D-Calif., said she wondered why some of the changes were necessary, given the successful detention of terrorism suspects in U.S. prisons and trial in court.

“If it ain’t broke, don’t fix it,” said Feinstein, who introduced separate legislation aimed at affirming citizens’ due process rights. Feinstein voted for the bill, as did Sen. Barbara Boxer, D-Calif.

The legislation also extends for another year a ban on transferring prisoners held at Guantanamo Bay and on the use of Pentagon money to build facilities in the U.S. to house such prisoners.

The U.S. continues to hold about 2,500 people suspected of being al-Qaida, Taliban or associated force fighters in detention centers around the world, according to an update Obama provided in a letter to House Speaker John A. Boehner, R-Ohio, on Thursday. Guantanamo Bay is holding 170 detainees, the president said.

The legislation also faced resistance from the administration over the Iran sanctions, politically popular efforts that sailed through the Senate. The new provisions, introduced by Sens. Mark Kirk, R-Ill., and Robert Menendez, D-N.J., will penalize financial institutions that do business with Iran’s central bank, particularly for the purchase of oil and oil products.

———
(Paul Richter of the Tribune Washington Bureau contributed to this report.)
___
©2011 Tribune Co.