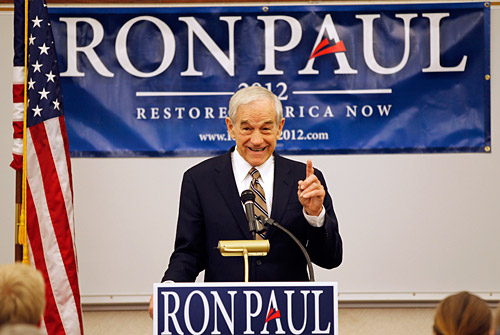 So seriously, in fact, that few would be surprised if he finished a strong second — or even won — the Jan. 3 Iowa caucuses.

The 76-year-old Texas congressman’s potential is evident in recent statewide polls that show him in or near second place, trailing former House of Representatives Speaker Newt Gingrich and in a virtual tie with former Massachusetts Gov. Mitt Romney.

Paul’s strength is also apparent anecdotally — he draws big, diverse crowds, like one recently in this small northeastern Iowa town.

People in the audience at the community library last week shoehorned themselves into the meeting room, listening intently to the libertarian Republican presidential candidate, as have people in meeting halls and college auditoriums all over the state.

They were sympathetic to his no-frills message of dramatically smaller government and a scaled-back foreign policy — a message he’s long preached, but one that now has wide mainstream appeal. And they appreciate how he’s engaging Gingrich, accusing the front-runner of “serial hypocrisy.”

Paul draws no big cheers; his audiences are serious and polite. They applauded in Waverly when he told them that the U.S. government can’t possibly continue spending at its current pace because the world economy is on the brink of chaos.

“The solution is that we have to decide what we want from our government,” Paul said.

Paul is tapping a grassroots groundswell that’s been apparent since early 2009, when the tea party movement mushroomed as conservatives grew frustrated with big government. They were particularly alarmed about annual federal deficits that topped $1 trillion for the first time, as well as the 2010 law requiring nearly everyone to obtain health care coverage by 2014.

They feel disconnected from Washington, angry at the gridlocked Congress, and see radical change as the only hope for progress. They are a diverse group.

“The system is not working,” said Reed Mick, a Waverly financial sales consultant.

“Paul has both wisdom and the right strategy. He predicted our economic problems long before anyone else,” added Jill Ellsworth, a Grimes massage therapist.

“We have to stop being the world’s policemen,” she said.

Paul’s most enthusiastic base is young people; he drew a standing-room-only crowd of more than 1,000 people at Iowa State University in Ames on Thursday night. On Monday, the University of Iowa’s student newspaper, the Daily Iowan, endorsed Paul.

“He reminds me of my grandfather. We need that type of person,” said Kaitlin Little, a Tripoli high school student.

He voted for Obama in 2008, lured by the candidate’s promise of change. “He was going to bring the troops home and spend less,” Cline recalled. “He really hasn’t fulfilled the later part of that promise. Paul not only has a plan, but also an idea of how to enact that plan.”

During his visits around Iowa, Paul describes that plan like a professor lecturing a class. When he’s done, Paul says thank you and leaves without the usual hand-clasping and picture-taking common at these events.

For 25 minutes, he describes his vision. He talks about his plan to cut $1 trillion from the federal budget. He rips the Federal Reserve System as dishonest and unconstitutional.

Sometimes Paul strays far from mainstream political dialogue. He laments how 1913 was a terrible year — that was the year the federal income tax and the Federal Reserve were established. He lauds the Austrian school of economics, which emphasizes lower taxes and less government, while criticizing easy credit.

Amanda Steenhoek, laid off from her factory job two years ago, questioned Paul’s premise that government is too eager to provide safety nets to people like her. Grow the economy through the private sector, Paul explained, and she’ll find work.
Afterward, Steenhoek, who is now trying to get a college degree, said, “Paul didn’t give the greatest answer, and I’m not 100 percent satisfied.”

But she’s probably going to vote for him anyway — because nothing else has worked to help her find a job since 2009.
“I believe if anybody can fix this mess,” she said, “it’s him.”