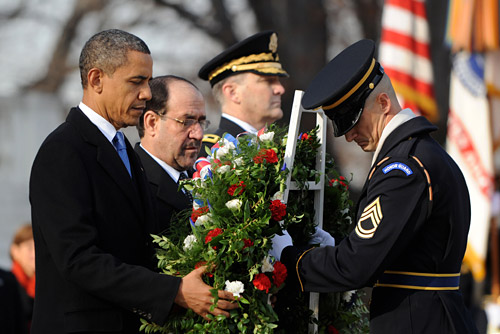 WASHINGTON — Declaring a respectful end to the war he once called “dumb,” President Barack Obama on Monday said the United States will continue to help Iraq with its security after this month’s troop withdrawal but that now it will do so by helping to train Iraqi forces and by trading with the country as it rebuilds.

Appearing alongside Iraqi Prime Minister Nouri al-Maliki, Obama paid tribute to the military personnel who have fought in Iraq over the past nine years.

“This is a historic moment,” Obama said. “A war is ending.”

While the days are over for U.S. combat troops keeping the peace, the Obama administration and the al-Maliki government are laying plans for future collaboration, which includes American military training Iraqi security forces to use American-made weapons.

And shortly after a Monday morning meeting between the two men in the Oval Office, the administration notified Congress of its intent to sell Iraq another batch of 18 F-16 fighter jets.

The day’s events kick off a week focused on the U.S. exit from Iraq, and on the fulfillment of Obama’s campaign promise to end the war.

When he was an Illinois state senator, Obama opposed the war in Iraq — not because war is never justified, he said, but because this one was “dumb.” It caused the United States to take its focus off of Afghanistan, where he believed there were more pressing problems.

Obama entered the 2008 Democratic presidential primary as the rare Democrat who opposed the war from the beginning, a helpful political tool as public opinion turned against the military action.

Now, almost a decade later, Iraq presents another political opportunity for Obama: As he gears up to seek re-election, he can cite this as a promise fulfilled.

Al-Maliki said the two countries will continue working together, now as partners.

“The relationship doesn’t end with the departure of the last American soldier,” he said.