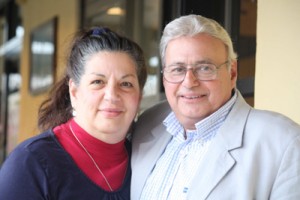 As bishop — a position akin to priest or pastor — Romney presided over a fast-growing flock that included Catalano’s wife, Sandy, a new convert. Ronnie, a cigarette smoking, wine-drinking Catholic, had accused Sandy of ruining their family by becoming Mormon. He tried to prevent her from attending church and from donating their money in the Mormon tradition of tithing.

(PHOTO: Sandy, left, and Ronnie Catalano, pictured in Medford, Massachusetts, say Mitt Romney played a big role in keeping their marriage together and in converting Ronnie to Mormonism, in 1991. Sandy converted in 1980.)

Sandy was thinking of leaving her husband and moving to Utah with their two children, an anathema in a faith in which families come first and church leaders are encouraged to bring non-Mormon spouses of church members into the fold.

What followed, the Catalanos say, was an extended campaign of kindness and faith that went far beyond what Romney was obligated to do as bishop. Romney took the Catalanos under his wing. He called Ronnie to invite him to church events, gave him tasks such as manning a grill or setting up tables to make him feel included, invented jobs around the church when Ronnie was out of work. He referred Ronnie to passages in the Book of Mormon that spoke to the importance of families, and told the Catalanos that he was praying for them, and even losing sleep over them.

In 1991, after 11 years of persuasion, Ronnie Catalano converted to Mormonism. The 67-year-old Budweiser driver is now deeply involved in the church and has given up smoking and drinking, which he says saved his life because his father and brother both died of lung cancer.

“Mitt was the one who really stood out. He was always caring about my family, my wife, my children,” Catalano said in a recent interview. “He taught me how to keep my family together.”

“He saved us. He rescued us,” added his wife.

George W. Bush is a born-again Christian; President Barack Obama has been a regular church-goer for decades; Jimmy Carter taught Sunday school. But no previous president or serious candidate can rival Romney for the time and energy spent in running a religious organization and ministering to its members.

Over the course of two decades, Romney served as spiritual and administrative leader for a Boston-area church and then as the head of a dozen Mormon churches. The work often took up 30 hours a week of his time, or more.

Had he not entered politics, Romney — a sixth-generation member of the Mormon Church whose ancestors were among the earliest members of the faith — might have put himself on a path to be chosen for the church’s governing body in Salt Lake City, the Quorum of the Twelve Apostles.

Faith-based credentials such as Romney’s are normally gold on the campaign trail. Yet Romney does not speak of his time as a church leader in Belmont. His Republican presidential campaign biography doesn’t mention any of his church roles, not even his stint as Sunday school teacher.

“People in his campaign wished he’d never been a Mormon or a Mormon leader,” said Ronald B. Scott, a fellow Mormon and the author of a just-published book about Romney, “Mitt Romney: An Inside Look at the Man and His Politics.” “They haven’t said, ‘How do we turn this sow’s ear into a silk purse?’ And he doesn’t talk about it.”

Romney knows well the political perils of a Mormon background. According to a Gallup poll, nearly 20 percent of Republican and independent voters say they wouldn’t support a Mormon for president. Others might agree with the Rev. Robert Jeffress, an evangelical Texas preacher who caused a stir in October when he called Mormonism a cult just before introducing Texas Gov. Rick Perry at the Values Voters Summit in Washington.

Romney’s service to the church “is something that most Americans would admire,” said David Campbell, associate professor of political science at the University of Notre Dame, who is Mormon. “But if he begins to talk about his service, then it would open up all the other questions about his religion.”

Romney was the bishop of the Belmont ward from 1981 to 1985, the “shepherd of the flock,” said Kim Clark, president of Brigham Young University-Idaho and a member of the congregation at the time. Romney was not paid for his service in Belmont or Boston; in the Mormon Church, congregation members are responsible for running all pieces of church life as volunteers.

His responsibilities included visiting the sick, meeting with youth groups, counseling married couples and delinquent children, arranging Sunday services, church classes and other events, and using Scriptures and the Book of Mormon to guide his congregation.

Nancy Dredge, who knew Romney when he first moved to Belmont, said he could be insensitive when he first became bishop of the church. She remembered a talk he gave to a group that was visiting the poor, and made a snide remark about people who “wear polyester and live in Medford,” a nearby blue-collar town. But over time, “he really learned to love people,” she said. “He really mellowed out.”

Though Romney comes from an affluent family, as bishop “you truly come face to face on an individual basis with all of the challenges and vicissitudes of everyday life,” said Grant Bennett, who succeeded Romney as bishop.

Friends from the time recall Romney rolling up his sleeves to pick squash on a church farm and showing up with a ladder to fix broken lights in homes. He once directed traffic in the midst of a blizzard on a highway, covered in snow and ice, so a church funeral procession could reach a cemetery.

Romney became stake president in 1986, the spiritual leader who presided over 12 Mormon wards in the Boston area. He would often lead church colleagues in prayer in the car when they were traveling, and fasted to help find answers to his flock’s problems, said Kenneth Hutchins, a former assistant to Romney who replaced him as stake president in 1994. Romney helped many Mormons overcome grief and depression, sometimes by laying two hands on them in a Mormon tradition of blessing, he said.

“I’ve laid my hands on people and so has Mitt, and given blessings of strength and healing and those blessings have come true,” Hutchins said. “I recall being on our knees and importuning the Heavenly Father to help us understand the things that we should do.”

One of the blessings Romney gave while bishop was to Sandy Catalano. Catalano became pregnant in 1982, but found out that the fetus was in her fallopian tube, a life-threatening condition for her that doctors said needed to be resolved by an abortion.

Catalano remembers lying in the hospital waiting for Romney, concerned that he would reprimand her. The Mormon faith opposes abortion except in extreme circumstances such as when the mother’s life is at stake or when the pregnancy is the result of rape. But Romney blessed her instead.

“He could see my anguish and my pain and gave me a blessing of comfort, and I felt this peace wash over me,” she said. “I knew it wasn’t my fault, that it was just a bad pregnancy.”

A year later he wasn’t as accepting with another congregation member. Carrell Hilton Sheldon was planning to have an abortion because a drug she’d been given to dissolve a blood clot was causing internal bleeding and could have harmed her fetus.

Although her stake president recommended that she go through with the abortion, Romney, her bishop, visited her in the hospital to try to dissuade her, said Scott, the author of the Romney book. When that didn’t work, he visited Sheldon’s parents in the Boston suburb where they were babysitting her four other children, preaching to them until Sheldon’s father threw him out of the house, Scott said.

“He was telling her father not to let her have the abortion, and her father threw him out,” Scott said in an interview. “He was appalled at the arrogance of Romney.”

In 1993, as he prepared to challenge Edward M. Kennedy for his Massachusetts Senate seat, Romney met with church leaders in Salt Lake City to outline his position on abortion, saying that he planned to tell voters that he was personally opposed to abortion but was willing to let women choose for themselves. (Romney now says Roe v. Wade, the Supreme Court decision that legalized abortion, should be overturned and that states should decide whether to allow abortions.)

After he ended his term as Massachusetts governor and prepared to run for the Republican presidential nomination in 2007, he delivered a speech titled “Faith in America” at the George H.W. Bush Presidential Library.

“I believe in my Mormon faith and I endeavor to live by it,” Romney said. But he did not mention his official role in the church, or how it lead him to numerous deathbeds and the homes of working-class families such as the Catalanos.