Gingrich: Palestinians are ‘an invented’ people 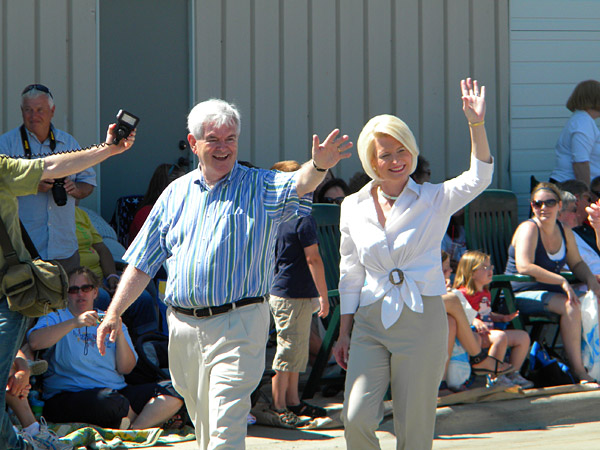 WASHINGTON — Republican presidential hopeful Newt Gingrich, in an interview with the Jewish Channel, called the Israeli-Palestinian peace process “delusional” and said Palestinians are “an invented” people.

Asked if he identifies as a Zionist, Gingrich said: “I believe that the Jewish people have the right to have a state.”

Referring back to the early 20th century, when the British government, in the Balfour Declaration of 1917, declared its support for “the establishment in Palestine of a national home for the Jewish people,” Gingrich suggested that at the time, the occupants of that territory — the Palestinians — did not have a legitimate claim to the land.

“I believe that the commitments that were made at the time — remember, there was no Palestine as a state,” Gingrich said. “It was part of the Ottoman Empire. And I think that we’ve had an invented Palestinian people, who are in fact Arabs and were historically part of the Arab community. And they had a chance to go many places.”

That view is held by some Israelis, but is generally rejected by the rest of the world.

U.S. presidents from both parties have in recent history supported a two-state solution to the ongoing conflict, in which Palestinians would live in a state of their own alongside Israel.

Of the peace process set in place by the Oslo Accords, Gingrich said: “I think it’s delusional to call it a peace process.” Both the Palestinian Authority and Hamas, he said, represent “an enormous desire to destroy Israel.”

“I think there’s a lot to think about in terms of how fundamentally you need to change the terms of debate in the region.”

Gingrich has recently criticized the Obama administration’s approach to the peace process, and he doubled down on that criticism in his interview with the Jewish Channel.

“You have to start with this question: Who are you making peace with?” he said.

“If I’m even-handed between a civilian democracy that obeys the rule of law and a group of terrorists who are firing missiles every day, that’s not even-handed. That’s favoring the terrorists,” he said.

Israel has been accused of violating the Geneva Convention, an international treaty established after World War II, which prohibits an occupying power from resettling its citizens in an occupied territory.