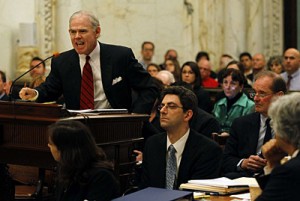 SAN FRANCISCO — A federal appeals court appeared unlikely Thursday to throw out a ruling against Proposition 8, the 2008 California measure that banned gay marriage, on the grounds the judge was in an undisclosed, long term same-sex relationship.

A three-judge panel of the 9th U.S. Circuit Court of Appeals, which has been examining Proposition 8 for more than a year, also seemed reluctant to make public the videotapes of the historic, 12-day trial on Proposition 8’s constitutionality.

The panel met for two hours Thursday to hear peripheral issues in the fight over same-sex marriage: whether last year’s ruling against Proposition 8 should be nullified because the judge was in a committed gay relationship and whether the videotapes of the trial should be unsealed.

Former Chief U.S. District Judge Vaughn R. Walker, 67, a Republican appointee, ruled in August, 2010 that Proposition 8 violated the federal constitution, a decision the panel is now considering on appeal. A ruling is expected in the next few weeks.

After challenging Walker’s ruling, ProtectMarriage, the sponsors of Proposition 8, raised a separate fight to invalidate the judge’s decision based on his failure to disclose his personal relationship with his partner of 10 years. The appeals court appeared skeptical.

“What about an unmarried heterosexual judge who wants to maintain the definition of marriage?” asked Judge N. Randy Smith. “Does he have to disclose that?”

Smith, the only Republican appointee on the panel, indicated it would defer to Chief U.S. District Judge James Ware, who succeeded the now-retired Walker and ruled that Walker was not required to have disclosed his relationship.

Ware decided that no one reasonably could have questioned Walker’s impartiality, Smith said. “So why should I undo that?” asked Smith, an appointee of former President George W. Bush.

David Boies, representing two gay couples who have challenged Proposition 8, said that even if Walker wished to marry his partner as soon as it was legal, he did not have to disclose it. When the court appeared skeptical, Boies noted that it did not have to reach that question to rule against the sponsors of Proposition 8.

Charles J. Cooper, representing ProtectMarriage, countered that it would be “a dark day in American jurisprudence” if courts accepted that a gay judge who wanted to marry immediately could decide whether same-marriage was permitted.

“There is no case anywhere in American jurisprudence that says a judge who is a minority, because he is a minority, can sit on his own case,” Cooper said.

Walker is openly gay but did not publicly discuss his sexual orientation and his 10-year relationship with his partner until after his retirement earlier this year.

He has never disclosed whether he wished to marry his partner, and Hawkins noted that he did not do so during the brief time in 2008 when same-sex marriage was legal. Judges generally are permitted to decide discrimination cases involving members of their religion, ethnic group or gender.

Although the panel seemed unlikely to overturn Walker’s ruling because of his personal relationship, it also appeared poised to rule for ProtectMarriage in its efforts to keep videotapes of the Proposition 8 sealed. All three members of the 9th Circuit panel noted that Walker had promised ProtectMarriage the tapes would not be made public.

Walker had wanted to disseminate videotapes of portions of the trial on the Internet, but the U.S. Supreme Court ruled 5-4 on the eve of trial that such broadcasts would be unacceptable. Walker videotaped the trial anyway, and when ProtectMarriage objected, said he merely wanted the tapes to help him review the evidence when he wrote the ruling.

Hawkins asked “whether lawyers can rely upon the promises made by a trial judge” and Reinhardt noted in a question that “the word of the court is supposed to mean something.”

Smith observed that Walker said in his ruling that the U.S. Supreme Court had “eliminated” the potential for public broadcast of the trial.

Gay rights groups want the videotapes broadcast, arguing the public should see for itself whether Walker’s ruling in the case was based on the evidence. ProtectMarriage has said videotapes could subject its witnesses to harassment.

The trial examined the nature of sexual orientation and the history of marriage, and the testimony overwhelmingly favored marriage rights. ProtectMarriage called only two witnesses.