MASON CITY — Jacob Jackson nodded to Ed Albers as Jackson got ready to bowl a practice game at Rose Bowl.
“Hey there, how’d you do the other night?” Albers asked.

“I’ve got to start working on my hook,” he said.

“You’re way ahead of yourself,” Albers said. “They’ve already got you thinking wrong.”

Hooking the ball may look impressive, but it’s definitely not one of the first things for a beginning bowler to work on.

“You’ve got to get the basics down first and build good habits,” said Albers.

He’s been bowling for more than 60 years, and at 85 years old is still going strong.

If all goes as planned, he’ll bowl in his 60th state tournament next spring, though probably not as a favorite to bring home more hardware.

No matter. He already has about 60 bowling trophies, and may be the only bowler in Iowa to have won all five major state bowling championships – singles, doubles, team, all-events and match game.

An ex-Marine, Albers is living proof of the power of discipline. He bowls league on Monday nights, is the sixth man on a Tuesday night team, and has been coach to countless aspiring keglers.

“He’s a good guy. He helped me when I just started bowling,” said Tim Carlson. “He’s a good coach.”

Albers, who is a former manager of the Rose Bowl, started bowling in 1948 in Belmond. “The guy who ran it was a pretty fair bowler. He got me started.”

Albers was taught to throw a straight ball. “I straddled the center dot and focused on mechanics. I got my average up to 190 doing that.”

He joined the Marines in 1950 and went to Korea. When he got back he started taking bowling more seriously. After rolling a 300 practice game in about 1955, a reporter from the Des Moines Register began following him. A short time later, Albers said, he bowled two 300s in a row.

He was asked to join a team in Mason City. Albers still recalls the white shirts, blue pants and red belts they wore. They finished second in the league against the Mason City All Stars. Later he was invited to join the All Stars. “We went to tournaments all over.”

Albers ended up bowling professionally for three or four years, competed in three U.S. Opens and bowled in 12 Masters tournaments.

He’s bowled all over the country, including California, Florida, New York and Texas.

“The 60s were good for me,” said Albers, who twice won new cars – including a 1967 Mustang and a 1969 Pontiac Tempest. He took the cash both times, but wishes he kept the Mustang.

Albers worked at the bean plant in Belmond for 17 years and later sold insurance, but didn’t like it.

After marrying his wife, Barb, in 1967, he moved to Mason City. He worked as a bowling ball driller for six years and then became the mechanic at Rose Bowl, where he ended up working full-time from about 1978 to 1990. Including part-time duty he’s been there for more than 30 years.

He’s a stickler for doing things the right way. “If it’s worth doing, it’s worth doing right. Don’t cut any corners or you’ll be right back doing the same thing over again if you do.”

“I see these kids come out here, the first thing they want to do is hook the ball,” Albers said, shaking his head.

He later joined Jacobs at the scoring table and drew a diagram on a sheet of paper.

It obviously worked for Albers.

He still averages about 173 a game. 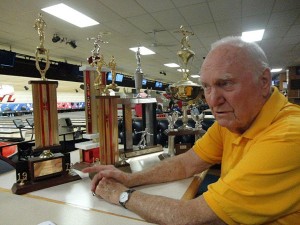 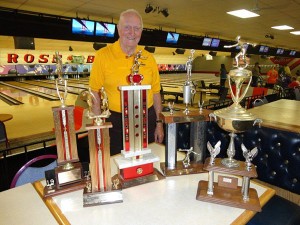 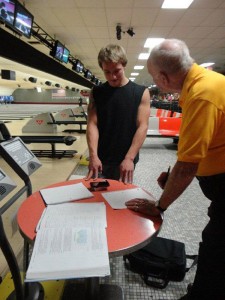 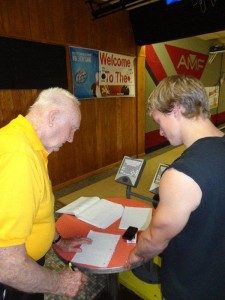 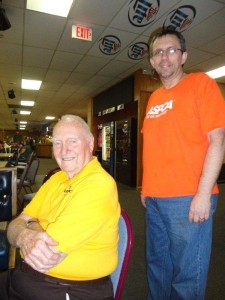