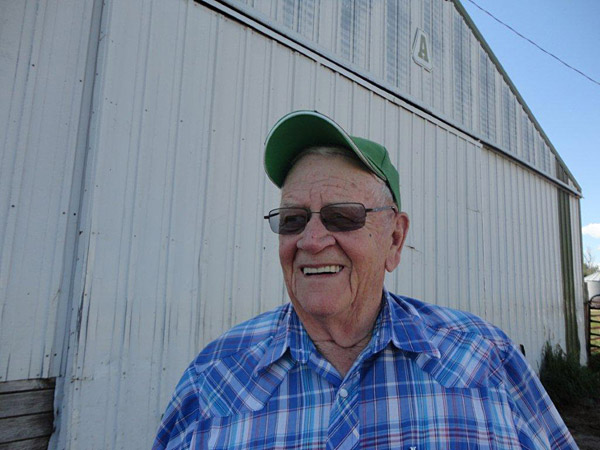 ROCKWELL – Paul Pruin took off his Pioneer seed cap and whacked the pony on the rump.

“C’mon,” he said repeatedly, coaxing the foal and four others back into the inner pen of a stable.

The 2- and 3-month-old baby Belgians resisted, moving toward the door in hopes of getting outside.

It was weaning time, and they missed their mommies.

Pruin, who’s been raising Belgians since the mid-1970s, patiently persisted, eventually getting the animals back where they belonged.

Patience is helpful when raising horses, he said. “I think with any livestock a person works with, the key word is patience.”
Especially with young ones.

“This big red one, he’ll be a good one,” Pruin said, pointing to the biggest of the five foals. He’s a grandson of Charlie H. Farceur, Pruin’s most famous Belgian. Charlie H. was recognized 10 years ago as one of the top Belgian stallions in the country.

Hundreds of his offspring are at work plowing fields or in competition hitches across the country, or are breeding stock in Amish country out east, Pruin said.

Charlie died about three years ago. “He’s buried out there in the pasture.”

Pruin, 77, and his late wife, Marlene, began raising Belgians shortly after they bought their 160-acre farm north of Rockwell along Highway 65. They started with a pair of yearling mares. “It took a while to get this business figured out. I’m still learning,’’ he said.

They worked it out well. In 2003 they were inducted into the Iowa Draft Horse Hall of Fame.

The couple’s three children, Doug, Barb and Leigh, all helped with training and conditioning the horses for shows.

In the late 1980s and through the 1990s, Pruin’s Belgians ñ the name of their company — had 40 to 45 head on the farm. Their hitch geldings were in shows all over the state.

There’s half a closet full of trophies. But those aren’t so important anymore, certainly not as much as the values and work ethic learned along the way “and the friends we got to know,” Pruin said.

“As the kids got older and had their own interests, we kind of phased out of it,” he said of the shows.

Then after Marlene died, he started backing off on the business. Now there are just five mares — Lindy, Libby, Leah, Lou and Darcy, ranging in age from 4 to 18.

They and their offspring have been a beautiful sight along Highway 65 this summer, especially in the early morning when they’re out in the soft sunshine in the lush green pasture — giant brown and gold beauties watching over their babies ñ wobbly-legged at first, often lying down by their mothers.

While grown horses sleep on their feet, foals usually lay down, Pruin explained. “Like any youngster, they just need a lot of rest and they rest best lying down.”

When the foals were separated from their mothers, many neighbors and passing motorists must have wondered where they went.

“”I’ve had three people ask so far, ‘Where are the colts?’ “ Pruin said just two days later. He chuckled at all the attention his horses get from passing motorists. “I never worry about my horses in the daytime. I’ve got a lot of people watching them.”

The ponies are as yet unnamed. Usually it’s a family project, he said. They’ll settle on a letter of the alphabet and name all of the foals that year accordingly. They started with A the first year. Some years it was tough to come up with enough good names for the letter, so they no longer go alphabetically, Pruin said.

This year’s brood will probably end up in Amish country out east. For about the past 10 years, Pruin and his son, Doug, who teams up on the Belgians business, have been sending three to four yearlings each spring to brothers Elmer and Orval Miller of Topeka, Ind. “They’ll train them for two years and sell them at auction or privately and we share the receipts.’’

Three or four of this year’s foals, who were born in May and June, will be leaving in February or March.

Until then they’ll spend many more mornings grazing in the picturesque pasture where Charlie H. rests in peace. Maybe his grandson, the strong red-haired dandy that stands out among the five foals, will follow in his footsteps.