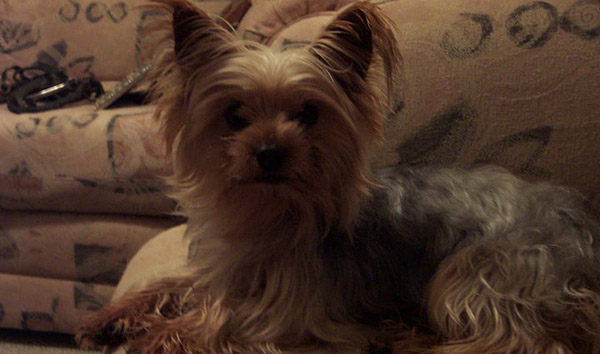 MASON CITY – “They killed my Yorkie”, was all that Cheryl Zeien of 1211 S. Massachusetts, could get out. She was crying and still in shock at the loss of her yorkie, Scooby, Tuesday afternoon, after her dog was attacked and killed by a pitbull while out for a walk. (See picture of Scooby, at right.)

“He Succumbed to his Injuries,” said Dr. LaCoste, a Mason City veterinarian.

Cheryl’s account of what happen that afternoon was that she, her daughter Aimee Mussman and her three year old granddaughter, Ava, were walking her two dogs Scooby, the Yorkie, and Grizzy, the German Shepherd like they did everyday. They were on leashes; Ava was walking Scooby.

A neighbor’s pitbull came barreling to the sidewalk and grabbed hold of Scooby. Cheryl said, “I started screaming for help, the neighbor boy came out and tried to gain control of his pitfall.”

While Cheryl was trying to rescue Scooby out of his mouth, she was scratched many times on her arm. With no luck getting Scooby, because the pitbull was so strong, she could hear Scooby’s ribs breaking. Aimee grabbed Ava and Grizzy and moved them away, to safety.

When the pitbull finally released Scooby, Cheryl immediately took Scooby to the Animal Hospital where he was treated by Dr. LaCoste.

“She was so compassionate, she did everything she could for Scooby. There was nothing that could be done, with his broken ribs and his gasping to breath. I held him in my arms while they put him to sleep. I tried to explain to my granddaughter that Scooby went to heaven, and she said he’ll be back Grammy he‘s just in the hospital.”

Dr. LaCoste’s explanation of Scooby’s injuries were, “Scooby was attacked by a larger dog. That presented what is called a flail chest, which means there were several broken ribs and an open skin wound. The chest wall is then unstable, so when the dog tries to breathe in, air comes thru the body wall, keeping the lungs from expanding. We were briefly able to stabilize the wound and remove the air from around the lungs but his injuries were too severe. The broken ribs likely punctured the lungs, resulting in more air outside and compromising the lungs. He succumbed to his injuries.”

Cheryl’s daughter, Aimee, was asked on Wednesday how Ava was doing. “She doesn’t understand what’s going on. I don’t know how to explain to a three-year old what actually happened. She was walking him and now he’s gone.”

The neighbors claim that the German Shepherd (Grizzy) bit one of them during this horrible ordeal, which led to checking out his rabies report. His rabies shot had expired in 2009. Grizzy is quarantined for ten days, “I woke up with no dogs to hold” Cheryl said Wednesday morning.

The neighbors pitbull was “always running loose. He’d come scratching at my door and he has even came up to my dogs before, but this was the first time that he’s attacked. When I got home from the Animal Hospital I went over to the neighbor’s, and in my emotional state I yelled at them saying that I’ll do everything I can to see that your dog gets put down. I do realize that it’s not the dogs fault, but the owners fault for not taking care of him. He’s always chained up to their tree, and he’s even lost his voice before from barking too much. The neighbor across the street is an elderly lady in bad health, she turned the pitbull in last week because she was afraid of him. The little time that he gets loose from his short chain to the tree, he runs and runs. Nobody can catch him until he gets tired.

“I didn’t even get an apology from them,” says Cheryl.

The pitbull will be quarantined for ten days because of the scratches he left on Cheryl. After the ten days, the owners can pay to get him back. “They won’t. They won’t put the money up to get him out, they’ll just get another one, and this one will be put to sleep,” said Cheryl.

Aimee said that she was going to continue trying to get in touch with the neighbors landlord because he has no any idea that these people have a pitbull. She will not be bringing her kids over to see Grandma until she feels comfortable that they are gone and that no other pitbulls will be there. “They just keep getting more, one right after the other.”

Cheryl got to see Grizzy Wednesday, and she is in the process of making arrangements to get him his rabies shot. She had rescued Scooby from a breeder at six months old. The breeder was going to keep him penned up and use him to breed. Cheryl gave him a happy home. “He’ll be truly missed, he was my best friend.”

Cheryl said later this Wednesday afternoon that an Animal Control officer called her to verify what the Pitbull looked like because when she went to talk to the neighbors, there were two pitbulls in the house. Cheryl identified the black one. The neighbors said the other on was running loose and they just brought it in the house. Cheryl said, “See, they already got another one.”

A knock at the door of the house where the pitbulls live was answered by a woman, who said “No comment, I am now grieving.”