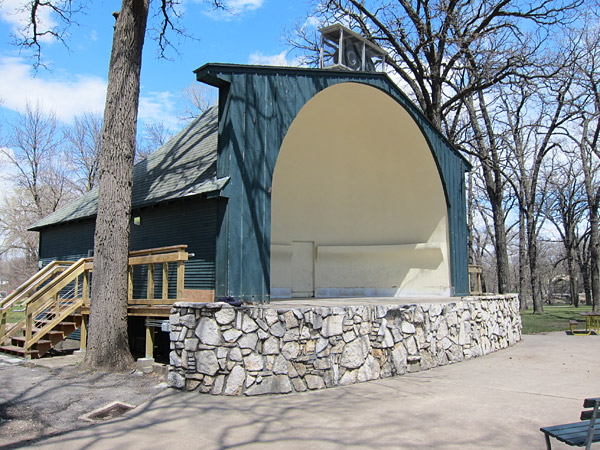 Story and video by Dave Hansen –

MASON CITY – The River City revival of Iowa’s oldest band shell is getting a big boost.

Plans and specifications are being approved by Mason City’s City Council and a state grant will allow the City to do a major makeover of the East Park Band Shell this summer.

But supporters continue to battle vandals as a long-term restoration project moves forward on the structure, which is listed on the National Register of Historic Places.

“Everybody loves this park because of the water and the trees and the grass. You hate to see anything get vandalized and broken and not even safe for the kids and pets to walk, that gets very disappointing,” said Tammie Garber of Norwood Springs.

She and her husband make frequent visits to the park and on Wednesday they noticed broken glass in the area of the Band Shell.

Recently, someone got by a locked side door and grabbed the light bulbs that illuminate the inside of the band shell during performances

Ironically vandals used to regularly swipe them from their sockets on stage and smash them when they were weren’t stored away behind a secure door.

“There’s nothing you can do so it’s very frustrating,” said Band Shell Supporter Craig Binnebose.

Last year someone pelted the venue with dozens of orange paint balls.

Preservationists also discovered that enterprising squirrels had not only chewed through the siding, they had turned part of the Band Shell into a storehouse for their nuts.

But Binnebose and others determined to save the Band Shell are also getting some good news.

The approved renovation plans will include new siding; a new asphalt shingle roof and the venue’s arch on its roof will change.

The graceful curve found in old photographs from the 1920’s and ‘30’s will be restored.

“It just kind of snowballed and a lot of people keep asking me where are we at with the band shell,” said Janice Easley

Easley donated the first $500 toward renovations and has led the charge in recent years to raise money and rally supporters to save the Band Shell.

The Band Shell has hosted thousands of performances over the years including one by native son and The Music Man author Meredith Willson.

“It’s important to save our structures, so many of them have been destroyed already,” said Easley.

State grant money of $50,000 for historic preservation, plus dollars from the city’s general fund and private donations will make this year’s restoration project possible which is expected to cost a total of around $80,000.